Tabby is a pattern seen on almost all types of cat breeds. It can vary according to the color or pattern, but every cat owns a gene of this pattern. The tabby pattern is marked by dark and light bands of hair, giving rise to a stripped pattern, spots, or both.

Mackerel Tabby is the pattern most commonly found in cats. It consists of slender and curved stripes that traverse at right angles to the spine, covering the legs and forming rings around the tail. 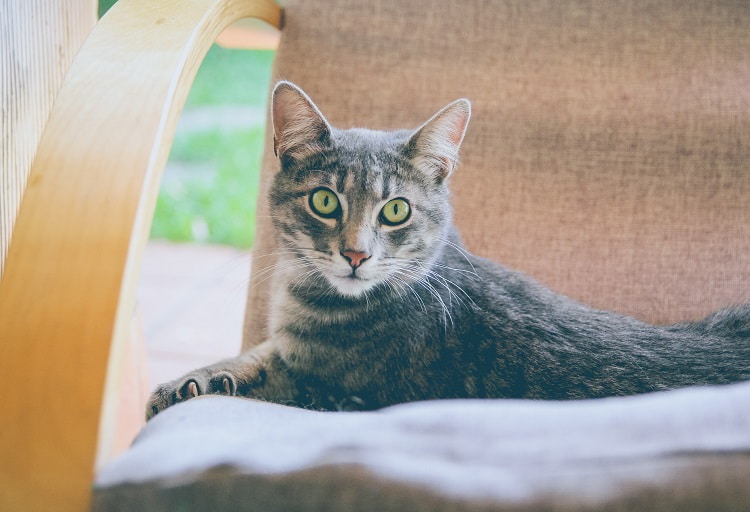 This pattern is similar to a tiger,  giving them the name ‘tiger cats’, but it differs in color combination. They also have the characteristic ‘M’ shape formed by these lines on their forehead. They also emerge from the corner of the eyes and run across the ears.

In this article, you will learn about the five things you did not know about Mackerel Tabby cats.

Mackerel Tabby cats are generally quite playful and loving to their owners. They love to play around and are not very aggressive. Not only that but they are also considered very intelligent. They are capable of being interactive.

These are known specifically as ‘ the dog of cats’ because of their amicable and active character. They can also be trained and made to perform exercises for mental and physical improvement. Overall, they are gentle and affectionate cats.

2. The Mackerel Tabby Is The Origin Of The Tabby Pattern

Mackerel Tabby is conjectured to be the origin of the tabby pattern formed by the hybridization of African Wild cat and European Wild cat.

The wide array of the tabby cats observed in this date is thought to have been started either by mutation or selective breeding method. Mackerel tabby themselves come in different colors as well.

3. They Were Once Associated With Witchcraft

Witches in the earlier times were not specifically characterized by a repulsive nature and black cats as pets. It was believed that mackerel tabby cats were associated with witches and were instilled with magic or demonic possession. Witches were said to prefer tabby cats over plain black felines.

Mackerel tabby cats have a peculiar personality. As much calm as they are, during the kitten stage, they can be hyperactive and excited about everything. They have an enthusiasm for adventure. They are not annoyed or aggressive. These cats are just super excited.

They are prone to be found in a tight spot due to this part of their nature. So, as an owner of mackerel tabby, you always need to keep a check on their activities and create a safe space for them when they are young.

5. They Are Associated With Some Interesting Legends

Mackerel tabby cats have been known since ancient times. They are believed to be a part of some legendary situations. Various incidents have been described relating to this class of cats.

A popular historical archive states that during the birth of Jesus, it was so cold in the manger that it was practically impossible for a baby to survive. His mother, Mary, tried to keep him comfortable by providing warmth from the animals’ bodies. But they were too big for him.

It was then that a tabby cat came over to lie close to him and give him the necessary comfort and heat.

Another incident related to Prophet Mohammed, who was once about to fetch his robe to go for his prayers, when he found his cat named Muezza sleeping on the sleeve of the robe. He had such affection for these creatures that instead of disturbing it, he decided to cut off the sleeve.

Ancient Egypt’s called cats ‘Mau’, probably due to the sounds they make. Some say that they regarded the M made by the stripes on the forehead sacred, while others say it stands for Mohammed. Some people also consider them frown lines.

Mackerel Tabby is a kind of pattern belonging to the category of the tabby pattern. It consists of lines drawn vertically from the spine down to the limbs and up to the ears. They also have a marked ‘M’ shape on the forehead.

In general, they are very friendly and affectionate. Excitability is also an element of their nature, especially during the kitten stage.

These cats are intelligent and associated with some legendary historical events. They were also believed to be companions of witches. Mackerel tabby is a great option to keep as a pet, but you should be careful.