More
Home Errors Pseudo-Terminal Will not be Allocated Because Stdin is not a Terminal.

The only time you’ll typically encounter the perplexing message “pseudo-terminal will not be allocated because stdin is not a terminal” is when you’re executing an SSH command from a script. It might function flawlessly if you’re running the same command from the command line.

Make sure your public key has been added to the SSH agent before continuing, and then try using ssh once more. You could have simply been lacking a key. On the other hand, you’ll need to work on your script’s troubleshooting if this doesn’t work. 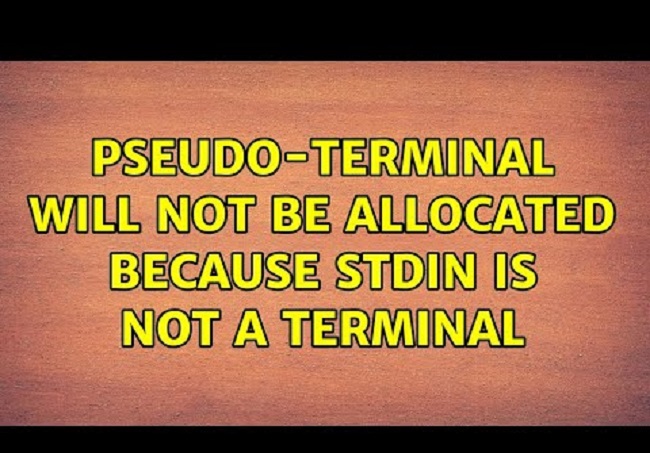 There are two command line options that could help you resolve the issue quickly. To force pseudo-terminal allocation, try ssh -t -t -R before the rest of what you were trying to connect into.

For illustration, suppose you were going to log into your account on example.com using the command ssh -p 80 [email protected], despite the fact that this website is merely a dummy for documentation that doesn’t exist.

If the issue persists, try running ssh -t -t -R -p 80 [email protected], for example. To successfully log into the system, you must, of course, replace the name with your actual account and hostname. Because stdin is not a terminal, this forces the allocation of a terminal, so you shouldn’t notice that a pseudo-terminal will not be allocated.

However, you might simply get a never-ending stream of error messages. Some users have commented that this might be funny.

Use Ctrl+C to End the Process Because it is Undoubtedly Frustrating.

Using a single -t switch or increasing the number are both options you can try. If this doesn’t work, try ssh -T -R -p 80 [email protected] instead of any -t switches in the command to see if it fixes the problem.

This technique completely disables the pseudo-terminal allocation process, so it may be effective when forcing it is unsuccessful. Naturally, none of this should be a problem from the command line, but be sure to make a note of the option that works from your script so you can use it in any additional scripts you need to run to access that server in the future.

Remember that -t forces the allocation of pseudo-terminals while -T disables it because the ssh command gave these two opposing options names that are similar. These options are case-sensitive, and because ssh requires a conventional TTY terminal to function, they are frequently required from within scripts. Naturally, you’d use your terminal emulator in your situation to accomplish this.

Some people might discover that the sshpass command, which isn’t included by default, makes their scripts function better. If you’d like to give it a try or need it for a particular use case, you can always install it with sudo apt-get install sshpass or sudo yum install sshpass.

You probably don’t need it if you aren’t already using it. However, in this type of environment, you can also use the same techniques to handle unexpected error messages related to pseudo-terminal allocation.

Use sshpass -p password ssh -T [email protected], for example, to force the system to function from within your script.

Occasionally, even after all of this is fixed, you might still receive one more error message. You should be able to function somewhat normally if you see a warning that says “no access to tty” and then is followed by a reminder that your shell lacks job control.

This error is brought on by a problem with csh, tcsh, or possibly the Almquist or another shell on the remote server. It’s possible that you didn’t notice it because you were receiving other error messages, but as long as you don’t see any more about pseudo-terminals, you should be able to carry on pretty much as normal.

However, since there may be no way to start the processes back up again, you might not want to try using Ctrl+Z in this situation to stop them. You won’t be able to log out if you receive the error message “There are stopped jobs” when you try to exit.

If you don’t mind losing work in the process, use the ps and kill commands to close any open jobs. You can leave at this time.