More
Home News What Car was Tiger Driving When Crashed

Insurance Institute for Highway Safety (IIHS) awards a “Top Safety Pick” designation to a select group of vehicles each year.

The nonprofit research organization’s 2021 edition, which was released in February, gave honours to 90 automobiles, up from 64 the year before. Automakers, according to IIHS President David Harkey, have “stepped up to meet the challenge.” 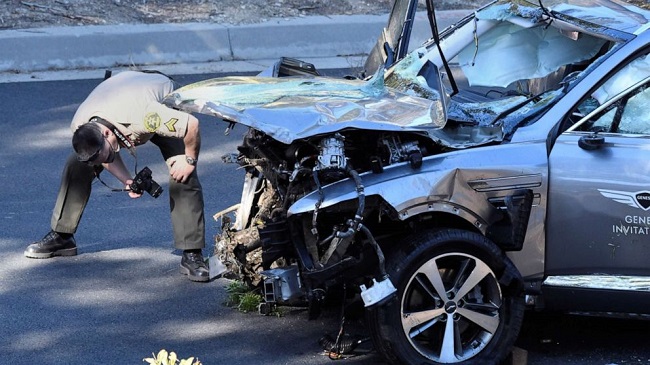 As a result of its success in winning the most trophies and other honours, Hyundai Motor Group was singled out for special recognition.

Another member of the Genesis family, the 2021 Genesis GV80, received the highest possible rating in six crashworthiness tests, including roof strength, the following month, earning the Top Safety Pick+ award from the IIHS.

As Tiger Woods’ luxury SUV, the Genesis GV80, was the one he was driving at the time of the collision, the public was already aware of the Genesis GV80’s safety credentials.

The 45-year-old golfer was travelling 84 to 87 mph in a 45 mph zone, hit a sign, crossed a centre divider, hit a tree, and was “airborne” as his vehicle careened off the road, according to material revealed last week. Although the crash was extremely serious, Woods survived. Does he owe his life to today’s stringent vehicular safety regulations?

How much more Secure are Modern Automobiles?

According to IIHS executive vice president and chief research officer David Zuby, “it’s clearly the fact that people are surviving incidents in modern cars that they would not have survived in cars of 20 or 30 years ago.”

The outcome of Tiger Woods’ crash is undoubtedly emblematic of how automobiles have improved, even though it is difficult to tell whether or not such advancements contributed directly to his survival.

Using statistics from the National Highway Traffic Safety Administration and other sources, the IIHS has found a considerable decrease in the rate of driver deaths over the past 30 years.

What is Zuby’s Explanation for such a Steep Decline?

In addition, the airbags went off. Other major safety changes include electronic stability control, stronger roofs, and better protection in side collisions (such side airbags).

Even though it has airbags in front of the driver and front passenger, the GV80 also has side curtain airbags that, in conjunction with the one in front, “worked well together to keep the head from coming close to any stiff structure or outside objects that could cause injury,” as noted by IIHS after its own crash tests of the SUV.

On YouTube in March, IIHS posted a video of the testing in which you can plainly see the whole driver airbag device. In addition, the institute’s test and photographs from Woods’s incident reflect the ability of this specific vehicle to absorb damage to the external body while leaving the interior largely undamaged.

According to a Reviewer of the Genesis Model

It’s a “schooner amid a sea of sailboats,” according to a reviewer of the Genesis model, the luxury brand’s first SUV.

The weight of the vehicle is also taken into account when determining its safety rating, and this trend can be seen on American roads, where drivers have been switching from sedans to SUVs for years.

Suvs have an advantage in crash protection because of their size and weight advantage. Zuby believes so.

Although this has always been the case, he points out that older SUVs were not subject to the same safety rules as automobiles. “However,” he continues, “over time, it now appears that SUVs… offer their occupants more protection than automobiles.”

In light of this, does it imply that everyone should instantly switch from a sedan to an SUV? It’s not always the case.

Personal Safety in a Crash

For Zuby, “I think there are aspects other than personal safety in a crash” that figure into people’s calculations regarding which new vehicle to buy.

One of the most important factors is the fact that SUVs have been emitting climate-changing automobile pollutants for years. Cars and trucks have also become safer over the past few decades, not simply large luxury movers.