More
Home Travel 10 Best Things to Do in Chicago

Watch the Chicago Air and Water Show or go to the Planetarium to see the stars and planets. Here you can visit odd museums or Art Institutes that house the works of some of the world’s most famous artists, such as Pablo Picasso.

Chicago Top 10 Things to Do (Illinois)

Large Parks with notable attractions, including as the magnificent Buckingham Fountain, may be found in this skyscraper-filled city.

You may take a stroll through the zoo and view animals you’ve never seen before, such as polar bears and penguins. Don’t miss out on the local Italian and American cuisines, as well as a Chinatown tour and authentic Chinese cuisine.

This is a city with a lot of free entries, even to major attractions, which is why you might overlook these. Let’s get to the top ten things to do in Chicago, Illinois, United States.

You can take a boat ride along the Chicago River through Lake Michigan. You can choose from a variety of packages that range from thrilling speedboat rides to relaxing cruises that will leave you speechless.

In an open boat with your family, get a good glimpse of Chicago’s beautiful skyline. You may certainly take a cab, but nothing beats a cruise for a relaxing perspective and experience of the city’s architecture. There are approximately 40 must-see landmarks in the area.

The Chicago River Architecture, Odyssey Chicago River, and Shoreline Sightseeing Classic Lake trip are just a few of the various boat options available. Finally, all of your dreams of seeing those movies and taking a cruise will come true in Chicago, Illinois.

It’s a view unlike any other. You will be treated to a breathtaking perspective of the state as well as three adjacent states. This 442-meter tower is one of Illinois’ highest structures.

If you’re able, take a step onto the Ledge. The 4.3-foot Ledge glass balcony, attached to the Skydeck, is 1353 feet above the ground. It’s the most exciting and exciting thing to do in Chicago, Illinois. When you look down through the glass at the city, hold your breath.

3. Tours of the Kitchen

In America, Chicago is the epicentre of delectable cuisine. When you’re in town, you should also check out the local attractions. Although you can go to the state’s famed Lou Mitchell and Twin Anchors, the local places are equally as spectacular.

Even for a dinner date, incredible selections like various beef sandwiches or healthy Pizzas are unquestionably wonderful snacking options. You can also visit Chinatown to sample authentic Chinese cuisine.

4. The Art Institute of Chicago

Since 150 years, the Art Institute of Chicago, Illinois has graced the city. The museum, which is located in Grant Park in Chicago, attracts a large population every day. It is one of the country’s oldest and largest museums, as well as one of the most appealing.

It houses works by some of history’s finest artists, including Pablo Picasso’s ‘The Old Guitarist’ and Georges Seurat’s ‘A Sunday on La Grande Jatte,’ among others. In the museum, there are occasional, temporary art exhibitions. However, there are 300,000 pieces of art in the permanent collection.

Apart from Native American and American art, you will witness wonderful African and Indian art. Artworks from the ancient Egyptian, Greek, Roman, and other 4000-year periods are also on display.

It also has well-kept pottery, jewellery, and other works of art. A few well-known mummies are also on display at the museum. This is without a doubt one of the most exciting and memorable things to do in Chicago, Illinois.

Grant Park is a tranquil oasis in the midst of the bustling city lights, directly in front of Lake Michigan. Grant Park, located in the heart of downtown Chicago, spans 319 acres. The park, which is named after the previous President of the United States, has undergone various expansions.

This open space hosts a number of festivals and annual events. The majestic Buckingham Fountain, a sight to behold, is one of the most popular attractions. Although only for a short time, the water show will leave you speechless.

Millennium Park is located on the park’s northwestern flank and features a unique aesthetic flair. The Art Institute of Chicago and Museum Campus Chicago are two more attractions. Soldier Field can also be found here.

In addition, you can go skating in the Skate Plaza or play a round of tennis on the tennis court. This park is a popular hangout spot for residents and a must-see destination for visitors.

The Chicago Culture Center was built by architects C.A. Coolidge and Robert C. Spencer in the last decade of the nineteenth century. Until 1991, it was known as the Chicago Public Library. The interior, which is designed in a neoclassical style, and the lofty ceilings will astound you. Preston Bradley Hall’s Tiffany dome is a must-see.

Every year, the Chicago Cultural Center in Illinois presents over 1000 visual and performing arts, as well as literary arts, programmes, public events, and exhibitions. If you’re lucky, you’ll arrive on the same day as a free public event at the Culture Center, which happens frequently.

Attractions such as the German U-505 submarine and the Pioneer Zephyr, a diesel locomotive on exhibit from the 1930s, will pique your interest. The intriguing Boeing 727, the first Boeing to enter commercial service, will also be on display. There are also a couple of WWII fighter jets on display.

The Museum draws a large population every year and is open on all days. Previously, admission was free, but in recent years, they have begun to charge.

Since 1868, people have been welcome to visit Lincoln Park in Chicago. The zoo covers a large area of 37 acres. Around 1000 animals are housed and fed there. This zoo, while being in the middle of a metropolis, does not fail to offer appropriate settings for its animals and has in-house provisions for the winter months.

African penguins and polar bears, which are unlikely to be seen at other zoos, are the main attractions. African Apes are among the other creatures in the zoo. The zoo also houses the commonly found ostriches, as well as charismatic giraffes and gazelles, among other creatures.

The zoo is free to enter and is open all year, with the exception of a few national holidays.

Above the atmospheric layer, you can see the mystery Planet 9, several planets, and a few other sightings. You’ll also get a rundown on the Telescope and other gear. It will be a once-in-a-lifetime experience.

10. Air and Water Show in Chicago

After a day of seeing gorgeous and mind-boggling museums, it’s time to relax and take in the Chicago Air and Water Show. It was initially done in 1959 and is now a popular tourist and local attraction. The nicest part about the show is that it’s free, which makes it even more appealing. This is the biggest free show in the entire United States.

It takes place above the North Avenue Beach, on the shores of Lake Michigan. There will be a line of supersonic jets waiting to take off. Other pastimes include skywriting, skydiving, and a few others. The shows were put on by the Army or the Air Force, such as the US Air Force Thunderbirds and others.

From the beaches and riverfronts to museums like the Museum of Contemporary Art, Oriental Institute Museum, and Museum of Science and Industry. You can take a stroll along North Avenue Beach or stop by the culinary hub for some tasty treats.

You can also cross the Chicago River by going over or under the Michigan Avenue Bridge. The DuSable Bridge, a bascule bridge, appears to be quite captivating as the double-deck opens and closes. This vibrant city is a must-see. 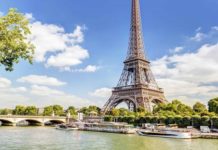 11 Best Things To Do in Paris