More
Home Entertainment ‘The Boss Baby: Family Business’ Review: Pacifier Be With You

Grab your briefcases and get ready for the meeting: “The Boss Baby: Family Business,” directed by Tom McGrath, is a retread of the original, with little to distinguish it from the original.

Ted (Alec Baldwin), the former boss baby, is now a wealthy businessman dressed to the nines. Despite having his own family, Tim (James Marsden) worries about A-type daughter Tabitha (Ariana Greenblatt), his brother’s wife. 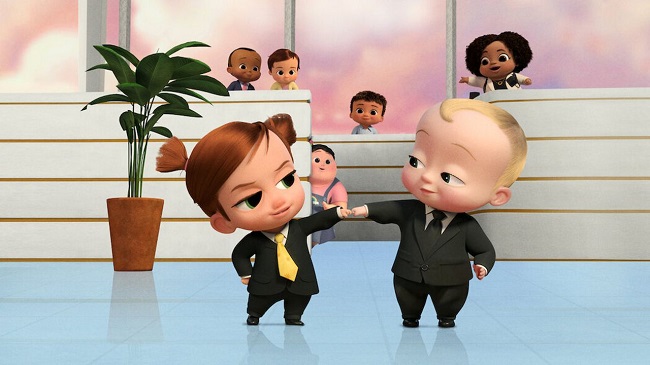 Tina (Amy Sedaris), Tim’s younger daughter and another boss baby, convinces him to join a mission. Ted and Tim revert to their childhood selves thanks to a mysterious new baby formula and go undercover at a talented school with a sinister secret.

Eventually Tim brings up the subject of him and Ted saving the world once more, but Tabitha declines.

“Wasn’t it a good story?” When Tim tries to explain it to her, she answers, “Well, it didn’t really make any sense.” “Wasn’t that a fantastic joke?” Tim has a question. Tabitha simply makes a noise.

No, but at least it’s conscious of itself. Considering that the story’s innovative but illogical plot lines create an unsolvable maze of plot holes.

In general, the humour is decent, but nothing stands out as really innovative. The continuous use of a pacifier to make corporate culture pleasant and humorous appears out of touch with the severity with which we today condemn poisonous workplaces.

In a baby suit? There’s never a dull moment when it comes to cute Is this a rehashed joke? This “Boss Baby” didn’t get the memo, that’s for sure.

Boss Baby: It’s in the blood.

Suitable for children ages 3 and up. Time spent on screen: 1 hour and 45 minutes On Peacock and in cinemas.