Which cat springs to mind first when you hear the name “Orange Tabby”? Garfield, of course, is our all-time favourite. “In my brain, the sky is blue, the grass is green, and cats are orange,”

Jim Davis, the designer of Garfield, famously stated. Who doesn’t like cats, right? Those who, in a prior life, were mice! Okay, enough with the jokes. Cats are beautiful, amusing, and adorable all at the same time.

Not only that, but their intransigence beneath their innocent exterior amuses the owners. As a result, cat owners believe that nothing brings them greater delight than a warm welcome from their cat.

They make you feel special, appreciated, and cared for. Above all, their pitter-patter around constantly reminds you of their presence. Humans are skilled at concealing their feelings.

Cats, on the other hand, would be more open about their inner feelings. They can startle you with their scream if they’re in a foul mood, but when they’re happy, they can curl their tail around your leg.

The majority of people, especially Russians, enjoy having ‘cats.’ According to Dalia Research, Russia has the world’s highest percentage of cat owners (59%).

Not all cats, however, are in high demand. According to a poll, Orange Tabby Cats are the second least popular cat to own. Why? Is it because of certain urban legends about them?

Then let us debunk the myths and show you why you should like these golden-orange kitties. Let’s go over some vital information about the Orange Tabby Cat.

1. There Is No Such Thing As An Orange Tabby Cat Breed!

Yes, you did not make a grammatical error when you read! There is no such thing as an orange tabby cat breed. In actuality, it refers to the striped pattern found on a cat’s coat.

Aren’t their elegant strokes and gleaming golden hair captivating? The enticing patterns on a cat’s body are known as ‘tabby.’ The name tabby is derived from the Arabic word ‘Attabi,’ which means striped silk taffeta.

French speakers mistook Attabi for ‘tabis,’ and English speakers mistook it for ‘tabby.’ As a result, tabby is a pattern rather than a breed. This cat design can be seen in a variety of breeds and types, regardless of hair colour.

They can be found in very cute Munchkin cats, Maine Coons, American Bobtails, and other animals. Similarly, almost all of them are orange tabby in coloration.

The agouti gene is responsible for cats’ orange colouring. Furthermore, all orange cats are tabbys. But keep in mind that not all tabbies are orange. Don’t be perplexed!

2. Orange Tabby Cats and the Four Different Coat Patterns They Have

Is it true that all orange tabbies have the same pattern? Without a doubt, no. Even within the same breed, different coat patterns can be found.

Orange Mackerel Tabby has a lion-like appearance! Don’t forget that the Tiger is the largest member of the Felidae (cat) family, thus some similarities are to be expected. Do you agree with me?

Have you already debunked two myths? But don’t worry, it wasn’t the last. There are plenty more amusing facts that debunk all of your misconceptions. Scroll down to see more.

3. For the colour orange, there is a specific pigment!

It is simpler to comprehend for cat lovers. They understand that orange tabby occurs in a variety of hues, including orange, reddish, yellowish, creamish, yellowish-creamish, and so on.

The only colour that can be seen is solid orange. Is the thought ‘why only these colours and not others’ nagging at you? Then sit back and relax; we’ve got you covered.

This is caused by the presence of a pigment known as ‘pheomelanin.’ This pigment, which is fascinatingly responsible for creating red hair in humans, predominates in orange tabby.

Is this why the orange tabby is referred to as the red-headed stepchild? Well! This appears to be overly dramatic, but that’s okay!

You already knew this if you’re a cat person, right? Oh, and don’t spoil yourself so soon. The following information may astound you! You’re not convinced? Then let’s go work it out.

4. There Are Historical References to Orange Tabby Cats!

Orange tabby is more aristocratic and antique (kind of!) than you might believe! You may not have had the opportunity to be linked with a legend, but this pussy has it crossed off her list.

When Jesus was born, he was put in a manger with hay all around him. Outside, it was bitterly cold, and baby Jesus began to shiver. He was unable to cope with the cold and began to cry.

Nothing worked, even though Mother Mary rocked him and covered him with blankets. She then summoned all of the animals to encircle him in order to provide him with some warmth, but nothing could block the cold breeze.

From afar, an Orange Mackerel tabby was watching. She then entered the manger and began cuddling up to him. Jesus was put to sleep by the cat’s purr. Mother Mary was so impressed by the efforts that she blessed the orange tabby with the letter ‘M’ (her initial letter) on the forehead.

Is this the right explanation for Tabby’s enigmatic ‘M’? Obviously, we’ll never find out. This, however, emphasises the historical significance of the orange tabby.

Winston Churchill, as we all know, adored cats, and he was particularly fond of orange tabbies. He had an orange tabby named ‘Tango’ earlier in his life since he liked orange tabbies.

He went on to acquire another named ‘Jock’ after that. Even he couldn’t keep the love of these flame-colored kittens from overwhelming him. Orange tabby was able to maintain contact with such a prominent figure, whom we could only wish to meet!

7. Their Nicknames Could Be Found On Your Refrigerator!

Which name would you give an orange tabby if you ever had the chance to have one? The majority of people call themselves ginger, marmalade, tangerine, apricot, or even butterscotch! Why is it that I’m so obsessed with the pantry? Most likely due to the orange tabby’s coat colour.

To some extent, it is understandable that we have called these cats’marmalade cats’ or even ‘ginger cats’ for years, but this was done to distinguish them from black tabbies. Despite this, the reasons for people’s fixation with food-related names for orange tabbies remain a mystery.

Why aren’t black tabbies named chocolate or blackcurrant if orange tabbies can be named apricot and tangerine after their coat colour? It’s fascinating to consider. So, what do you think?

Surprisingly, males account for roughly 80% of orange tabby cats. Scientists and academics are attempting to elucidate the reasons underlying this.

However, there isn’t much success in this area. On the basis of the foregoing, some speculate that there may be an undiscovered genetic link between sex and coat pattern. It’s worth noting that the majority of Calico and Tortoiseshell cats are female.

This emphasises the possibility that there are considerable relationships between sex and coat colour or Cat Breeds. As a result, the orange colour might most likely be attributed to the X chromosome.

Obviously, these are all nighttime shootings. Clearly, more research has to be done on this before any firm conclusions can be reached.

9. The Orange Tabby Cat Is a Foodie!

Oh! Did the title make you think of Garfield? Yes, the orange tabbies are much like your favourite cartoon cat, Garfield, when it comes to food.

If you take your gaze away from them, they’ll most likely be seen cramming the refrigerator! Cats are carnivores by nature, which means they can readily gain weight.

Why not provide these omnivores with plant-based nutrition? Remember that cats may have difficulty digesting plant-based foods, resulting in health problems.

However, you should not force your cat to consume a full meat diet because, like humans, cats might develop ailments such as obesity, feline diabetes, and cancer.

Apparently, these cats’ diets should be strictly monitored, or else you can end up with an abnormally huge cat! This isn’t to say that you should deprive your cat of food. Your cat will be fit and healthy if you combine a controlled diet with exercise and fat-burning activities.

Don’t forget about Garfield! Jim Davis seems to have paid close attention to his orange tabby before drawing this cartoon. Nevermind!

In actuality, these cats are too sluggish to get up (kind of!) and can be seen lounging around aimlessly. As previously said, these cats enjoy eating and are, quite frankly, lazy.

Without a doubt, they will become overweight and obese as a result of their approach. To combat this issue, cat owners should engage their cats in cat-friendly activities and keep them as active as possible.

This would not only make people lose weight more quickly, but it would also make them more athletic.

It was previously stated that orange tabby comes in a variety of colours. Their colour tones range from reddish to yellowish-cream. Have you, on the other hand, ever heard of personality shades? Every orange tabby, like humans, has a distinct personality.

We can have a friendly, playful, cuddly, and assimilation orange tabby, but we can also have an aggressive, always-screaming, and reserved orange tabby.

Assuming that other orange tabbies are as aggressive or as happy as the one you had previously will not help you. In this scenario, generalisations never work.

This fact, however, should not deter you from getting one because every cat, regardless of breed or texture, has its own distinct personality. Above all, if human personalities can be tolerated under the guise of “individual diversity,” why can’t cats?

The majority of the time, you’ll get a cuddly, attractive, and amusing tabby, but even if yours is an outlier, it shouldn’t be handled differently. Personality is genetic, but it can be modified with a little care and work, so if acceptance isn’t possible, why not make an attempt to live a better and happier life?

Orange tabby cats appear in everything from commercials to mythology. ‘Garfield,’ a film about an orange tabby cat, has left an indelible mark on everyone’s heart.

These flame-colored kittens have also been depicted in a number of artworks. In his iconic picture “Two Cats Fighting,” John James Audubon depicted a ginger cat.

In addition, the cat in Pablo Picasso’s picture “Cat Eating A Bird” was none other than an orange tabby. In addition, Katherine Hale, a British novelist, wrote a series of children’s novels under the name ‘Orlando,’ the name of her family cat.

Oh! How could we overlook ‘Morris’? Some memorable ginger cat characters include Crackerjack from Harry Potter and Orion from Men in Black. Orange tabbies are the second least common cat to be owned by individuals, despite so much on-screen representation! This is a strange and remarkable situation.

Of course, we may not understand the specific causes for this, but we can find it out if we own one. Perhaps you’ve come to the conclusion that we’re all blindly following some traditions that have no foundation. Most likely, you’ll brag about how much fun you had with orange tabby! Who is to say? 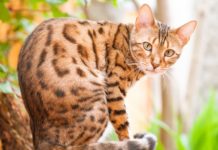