More
Home Pets Everything You Need to Know About Ocicat Cat

There are countless species to choose from if you are thinking of owning a cat. They range from white Persian cats to plain black Bombay cats with tabby patterns.

Ocicat is also a breed that you can pet if you fantasize about having a wild cat as your pet. Ocicat itself is an entirely domestic cat, but it was bred selectively to look like a wild cat. It is a hybrid of Abyssinian and Siamese breeds. The first Ocicat ever was named ‘Tonga’. 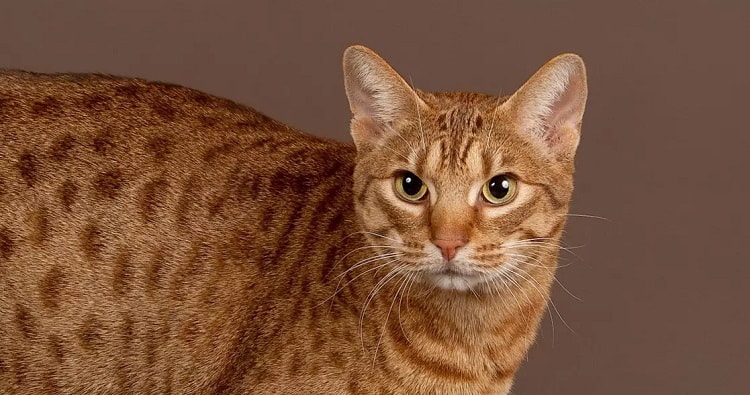 Later, other breeders started to create the same hybrid, making it a huge portion of the population of cats. They have a medium-sized and athletic body. It comes in different colors such as chocolate, ebony-silver, lavender, fawn, cinnamon, tawny, chocolate-silver, and even more.

In this article, you will learn everything you should know about the Ocicat cats.

Things You Should Know

Before owning an Ocicat, you should know these things about them-

They have a thumb-shaped spotted pattern and are wild looking. They are easy-going and get adapted to a particular environment quite easily. Ocicat cats have a loving and affectionate nature.

You must avoid adopting an Ocicat if you have a lonely household because they prefer company over being alone. They are good companions to other pets as well.

These cats are very athletic with lean muscular body. If you perform any activity that requires their involvement, they will not hesitate to do it.

The best thing about Ocicat cats is that they are the least aggressive in nature. They don’t attack even the new people they meet and get friendly easily. They are calm, so they can be tailored into the best version of themselves with proper interactive training and exercises. They may even try to involve in a conversation.

Ocicats are prone to develop genetically constituted health problems easily. Although they have a long lifespan, there is a high risk of them catching a disease. Cats can easily become obese if they are not made to exercise and if the diet is not checked. It can lead to further problems.

Some of the most common problems include:

You must take care of your Ocicat properly to avoid such severe health issues. Take them for regular check-ups to your vet so that if any problem is there, treatment begins as soon as possible.

Due to their high intelligence, Ocicats also have a tendency to explore things that have a chance of leading to damage to the object. In order to avoid such destruction of your precious things, you should keep them hidden from your cat.

You should provide them with car toys or make them perform exercises to channelize their immense energy in a constructive manner rather than letting it spend in destroying objects. Since they have a low tolerance for loneliness, you should also give them an interactive environment. Otherwise, it can lead to reckless behavior.

These cats require low maintenance, and not much cost is spent to manage them. You should brush them every week at least to remove dead hair. It can be done easily using a brush or chamois.

Although they have good teeth, proper brushing should be done to maintain dental hygiene. You should maintain a proper routine for its feeding schedule. Showering them is not essential but if you are planning on doing so, make sure the shampoo suits their coat and enhances the color and texture.

Normal care such as trimming nails, cleaning ears properly, and brushing is all that is required.

Ocicat is a popular breed of cat that are known for manifesting the physical characteristics of a wild cat. They are 100% domestic but can fulfill your wish of adopting a wildcat by their looks.

This breed of cat is very athletic and playful. They will engage in all the household activities actively, which involves them.

They despise loneliness and are better suited for environments with a company. They have an amicable nature towards family members, strangers, kids, and other pets as well. Due to their low temper and high intelligence, they can be trained without much effort.

Their health might pose a problem, but with regular check-ups, it is not an issue. Generally, they are low maintenance, and only basic things such as trimming nails, cleaning ears, and brushing are required. Overall, they are gentle and a good option to choose for cats as pets.