More
Home Errors It Looks Like You Don’t Have Permission to Save Changes to This...

On our mobile devices, we frequently edit pictures. If you attempted to edit a picture on your Windows computer but were unsuccessful, you may have seen the error message “It looks like you don’t have permission to save changes to this file.”

Since photo editing is something we do frequently and take for granted, this can be very annoying. It turns out that the error message you are receiving is due to insufficient permissions, as is clear from the error message itself.

Now, when we talk about insufficient permissions, we’re not just talking about the fact that you don’t have access to the file. If that were the case, finding a solution wouldn’t have been too difficult and would have been fairly simple. 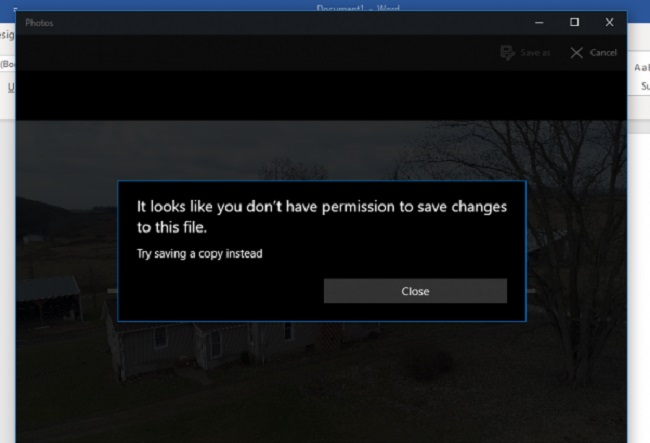 You shouldn’t be concerned because permissions problems like the one in question and You don’t have permission to save in this location are fairly typical. It turns out that the problem might even arise when you have adequate access to the file, which is when it becomes annoying.

The issue usually arises when you transfer the image you’re trying to edit from another drive to your computer, or occasionally from your OneDrive storage.

It turns out that when you transfer an image from another drive to your computer or to OneDrive as previously mentioned, the image is frequently blocked and cannot be modified. To proceed with your editing task, you will only need to unblock the image in this situation using the Properties window.

Having said that, there are additional reasons why the problem might arise. Without further ado, let’s get started on the various workarounds you can use to remove the error message in question so that you can edit your pictures without any problems.

The first thing you should try to do if you are using a third-party photo editor and receive the aforementioned error message is to open the photo editor as an administrator. This method does not apply to you if you edit your photos using the built-in Windows Photo Editor, so you should move on to the next one.

It turns out that the reason you are unable to save the picture after editing it is sometimes because the photo editor application you are using does not have enough permissions over the image.

Therefore, the most straightforward course of action in this case would be to try running the programme as an administrator so that it has more than enough permissions to edit the relevant file. Follow the directions below to accomplish this:

Picture to be Saved in a Different Folder

It turns out that saving the image you are editing in a different folder is another way to solve the problem. This means that you should attempt to save the image in a directory other than the one in which it actually exists.

As an illustration, if the image is already on your desktop, try saving it somewhere else and see if that works. As a result of being able to save the image in a different folder than where the image was located, this has been reported by other users who were having a problem that was similar to theirs. So, do try it out for yourself to see if it works for you.

The Properties of the file are one of the main reasons you might see the error message in question here. This occurs when you transfer an image from one drive to another or, in some cases, from OneDrive to your computer.

Understanding how to use OneDrive can be very helpful, but it can occasionally lead to problems like this one. In this scenario, the operating system on your computer blocks the file, making it impossible to edit the image.

If this is the situation, all you have to do to edit and save the image without any problems is unblock it in the picture’s Properties window. Follow the directions below to accomplish this:

The Photos app is most likely to blame, so you will need to repair it if none of the previously mentioned fixes work for you and you are using the Windows Photo application on your computer to edit the image.

This can be done fairly easily and will search for and attempt to fix any app issues. You can try Resetting the app, which will essentially reinstall it on your system, if repairing the Photos app doesn’t resolve the problem. Please follow the guidelines below: