The ancient Greek term acrobatiko means “to rise” or “to go forth,” and it is from this root that we get our modern word acrobatics. Artistic gymnastics is a competitive gymnastics sub-discipline in which gymnasts execute routines of acrobatic skills, dancing, and tumbling set to music in groups or pairs.

Every single one of them is classified into a given age bracket and evaluated accordingly. Each pair consists of gymnasts who vary in terms of height, weight, and skill level.

They use their equilibrium and mutual support to execute the intricate steps. Some of them are known as ‘bases,’ and they usually pitch or provide support. They are counterbalanced by gymnasts of shorter stature, called “tops.” 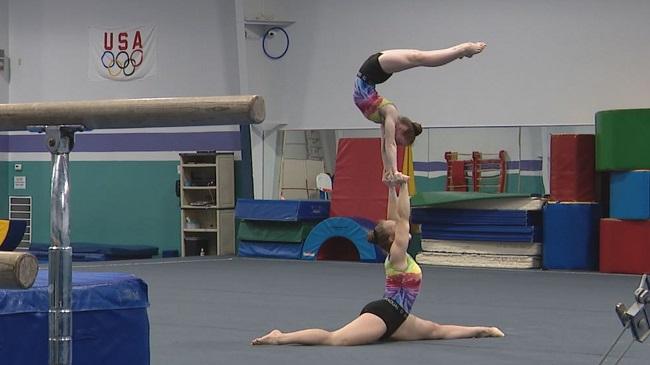 An Overview of Acrobatic Gymnastics’ Rich Past

The origins of acrobatics can be traced back to the structured forms of gymnastics used in ancient Greece and Rome.

Early depictions of acrobatics in Bronze Age art often feature bull-jumping, an aggressive manoeuvre against a bull common in ancient cultures with a history of bull worship.

Both of Homer’s epic poems, The Iliad and The Odyssey, feature recurrent references to acrobatics (Homer – One of the greatest and most influential authors of all time who lived in Ionia in the 8th – 9th Century BC).

Even in ancient Greece, where they held social gatherings called “Symposia,” acrobatics were a component of the entertainment.

In the Middle Ages, travelling troupes of acrobats, tumblers, and jugglers entertained the nobility of Europe by performing in the precursors to today’s circuses.

The circus strongman would frequently perform acrobatic feats like handstands and other gymnastic feats. During the Vaudeville era (Vaudeville is a theatrical genre of variety entertainment that originated in France at the end of the 19th century), acrobatics and tumbling were highly sought after skills due to their great value as entertainment.

By the turn of the twentieth century, acrobatics had already developed in two distinct ways. The first was and still is the acrobatics on apparatus (trapeze, ropes, etc.) that characterises circus shows.

Tumbling and the Pyramid were the other. Originally devised as a way to demonstrate the capabilities of the human body, these have since evolved into a competitive sport.

Acrobatic Gymnastics Competitions are Featured at both the World Games and the European Games.

While the FIG doesn’t mandate that gymnasts win their national championships before competing internationally, several regional federations base team selections on gymnasts’ results at the national level.

Audiences tend to flock to acrobatic gymnastics performances because they are exciting, thrilling, and intriguing.

Although in certain contests a minimum score is necessary to qualify for medals, the standard forms still offer gold, silver, and bronze medals.