The path and history of Italo Ferreira leading up to the Tokyo 2020 Olympics. By shattering a board in the process, the Brazilian won surfing’s first Olympic gold medal at a men’s division.

When it comes to doing things, Italo Ferreira doesn’t play around. To a certain extent, this also applies to surfing. 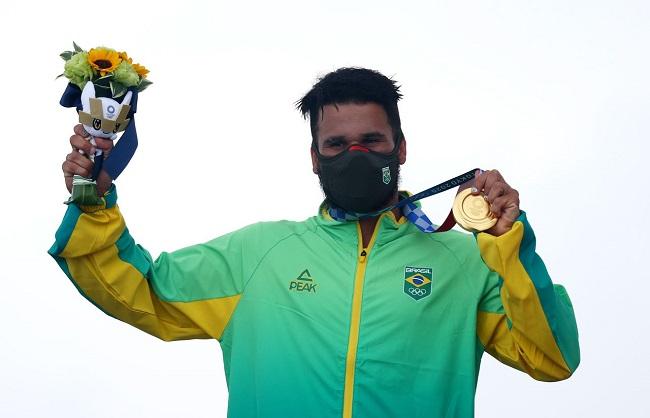 The Brazilian headed into the Tokyo 2020 Games determined to win gold and ready to use whatever means necessary to do it.

Ferreira, at age 27, is the current World Surf League (WSL) champion and the Olympic champion in the sport of surfing.

From modest beginnings as the son of a fisherman, this young guy has amassed an astounding list of accomplishments and collection of trophies.

He is physically strong, quick on his feet, athletic, and passionately competitive.

A few minutes into the first-ever Olympic final heat, his board broke, but he collected a replacement from the beach, paddled back out, and finished the job, beating Kanoa Igarashi of Japan.

The Brazilian who is rapidly becoming “the man to beat” in the water shows no signs of nervousness.

í. Ferreira Winning Gold in Surfing at the Tokyo 2020

After winning gold in surfing at the Tokyo 2020 Olympics, Brazilian Italo Ferreira was grateful to his cousins for their support.

Famous for his aerial surfing prowess, Ferreira didn’t start out with his own boards. The son of a fisherman had to borrow boards from his cousins so that he could go surfing, and his cousins were more than delighted to lend a hand.

The young surfer’s destiny was altered when he was found by the famed Brazilian surge coach Luis “Pinga” Campos at the tender age of 12. Ferreira’s potential was seen by Campos, who has discovered practically every major Brazilian in the last decade, at a junior competition in Ponta Negra.

Young talent was immediately nurtured by Campos, and by 2011 the Brazilian was fighting at the Junior World Championships, where he won two rounds and placed second overall.

In 2015, he made the big jump to surfing’s World Championship Tour, the sport’s most competitive circuit, and he immediately became a fan favourite. After finishing the circuit in seventh place, Ferreira was named the rookie of the year.