When attempting to launch the AVD in Android Studio, some users receive the error message “x86 emulation currently requires hardware acceleration!” After the user tries to compile an application using Android Virtual Device, the problem typically arises shortly after.

As it has been reported to happen with both newer and older builds of Android Studio, the problem is not unique to any one build. There have been reports of the error occurring on Windows 7, Windows 8, and Windows 10. This indicates that the error is not specific to any one version of Windows. 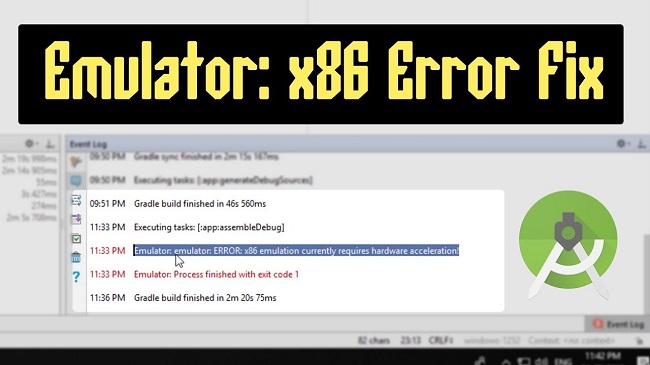 The Message “x86 Emulation Currently Requires Hardware Acceleration!” What is it Caused by?

We looked at various user reports and the troubleshooting techniques used by some affected users to look into this specific issue. We discovered that there are a few typical situations that will result in this specific error message:

This article will give you a list of tried-and-true troubleshooting techniques if you’re currently having trouble fixing the “x86 emulation currently requires hardware acceleration!” error. You can find a number of solutions to the problem that other users who are experiencing it have used down below.

We recommend that you use the strategies listed below in the order that they are presented in order to maintain maximum effectiveness. Eventually, you ought to find a solution that works for your specific problem.

Let’s make sure the problem isn’t actually caused by the Intel x86 Emulator Accelerator being missing before accessing the BIOS settings (HAXM installer). Even if hardware virtualization is enabled on your computer, AVD will not be able to compile applications that use it without this module.

When the missing module was downloaded and installed using the HAXM installer, several users who were experiencing the same error reported that the problem was resolved permanently. For detailed, step-by-step instructions, refer to the list below:

Continue to the next below if you’re still getting the “x86 emulation currently requires hardware acceleration!” error.

If you use Avast as an additional layer of security, one of its security features most likely caused the error. Avast’s hardware-assisted virtualization is known to clash with Android Studio’s AVD, resulting in the error “x86 emulation currently requires hardware acceleration!” as many users have noted.

If you have Avast installed and this situation applies to you, follow the steps below to disable hardware-assisted virtualization from the security program’s Settings menu:

Continue to the next method below if you’re still getting the “x86 emulation currently requires hardware acceleration!” error when running the AVD.

It’s likely that the error message is occurring because hardware virtualization is disabled in your BIOS/UEFI settings if the first method didn’t help you fix it.

In typical circumstances, hardware virtualization ought to be turned on by default; however, manual intervention, BIOS updates, and even some third-party software may disable this technology.

Remember that the procedure for enabling hardware virtualization will vary depending on your BIOS/UEFI settings, your motherboard, and the maker of your CPU.

Entering your BIOS or UEFI Settings, however, would be the first step. You must press the Setup key during the initial booting sequence if your computer has the BIOS legacy settings menu. The specific setup key ought to be visible on the first screen, but if it isn’t, you can look it up online by searching for “*motherboard model + setup key*.”

You must first access the Advanced Startup menu if your computer has the more recent UEFI model. To do this, open the Run dialogue box by pressing Windows key + R, type “ms-settings:recovery,” and press Enter to launch the Settings app’s Recovery menu. When you get there, just select Restart now from the Advanced startup menu.

Start looking for the hardware virtualization option once you’ve gained access to your BIOS or UEFI settings. Your BIOS/UEFI version will determine the name that this setting is listed under.

When you finally succeed in turning on hardware virtualization, save your BIOS/UEFI changes, restart your computer, and check to see if the issue is fixed when it starts up again.

The problem might have occurred because Windows Hypervisor Platform was not turned on in your system if you’re having trouble using virtualization technologies with an AMD CPU (newer CPU models like Ryzen).

But keep in mind that you must have Windows 10 build 1803 or an earlier version in order to activate this feature.

The Turn Windows Feature On or Off screen is where you turn on the Windows Hypervisor Platform. Here is a brief explanation of how to do it: