Eleven suspects were taken into custody on Saturday after a roadside standoff in Massachusetts between police and a group of armed men wearing tactical gear who claimed to be part of a Moorish American gang concluded.

The Massachusetts State Police reported that at 1:30 a.m. on Saturday, a state trooper pulled over to inspect two vehicles in the emergency breakout lane of Route 95 in Wakefield. 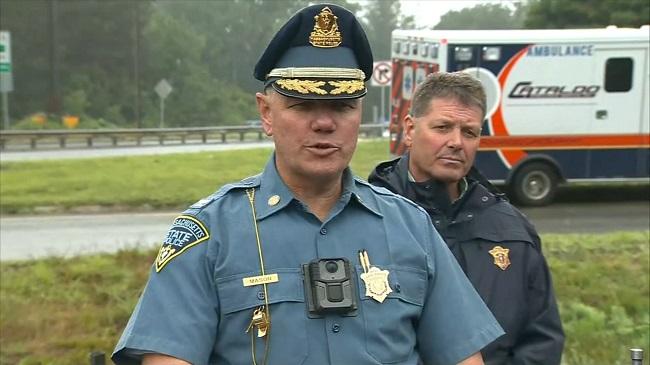 The individuals seemed to be military personnel because they were carrying guns, wearing military attire, and refuelling their trucks.

Later, the standoff went into some woods next to the highway, but no shots were fired there.

The police apprehended nine of the involved males at around 10:15 a.m. Two individuals were apprehended at roughly 8 a.m. Colonel Mason said that the guys turned themselves in without incident, and “a number” of weapons were taken.

He claimed that teamwork, professionalism, and patience were all essential to the successful conclusion of this case. We want “a safe resolution” when it comes to the outcome.

According to Colonel Mason, the guys involved in the standoff identify as members of an organisation called Rise of the Moors. According to their website, they identify as “Moorish Americans dedicated to educating new Moors and influencing our Elders.”

The colonel claimed that their self-declared leader wanted it made clear that their philosophy was not anti-government. Our investigation will help to clarify their ideology and motivation.

He Stated that there was “Training” Travelling From Rhode Island to Maine.

In a livestream that was broadcast early on Saturday morning on the group’s YouTube page, a guy declared, “We are not anti-government. The soldier-looking man claimed that the group had stopped to fill up their cars with petrol so as to avoid “making any unnecessary stops” while travelling with their weapons. The man also mentioned “their private land.”

We do not mean to be antagonistic or aggressive, he added in the conclusion. In other words, “We are not anti-government or anti-police; we are not sovereign citizens; and we are not fanatics of the Black identity.”

We are foreigners, a different group member yelled from the background.

According to the Southern Poverty Law Center, a group of Moorish sovereign citizens began to organise in the early 1990s.

It is a subset of the antigovernment movement known as the sovereign citizens movement, which maintains that local, state, and federal governments do not have any power over the people.

It’s unclear whether the Rise of the Moors is associated with the uprising.